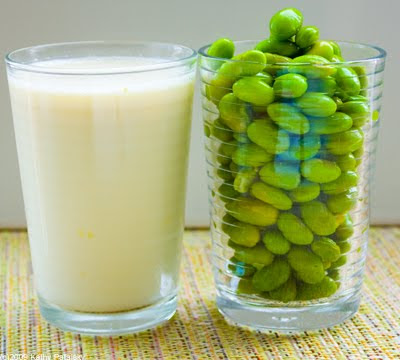 Note from Dos: John Robbins is one of my personal heroes, in fact, it was largely in part to my reading Diet for a New America that set me on the path to being a lifelong vegan over 20 years ago.

In addition to Diet for a New America, Mr. Robbins has written what I consider one of the most well-written, informative, well-researched, life changing books I have ever read in The Food Revolution. His website at http://www.foodrevolution.org/ is an amazing resource for great vegan information. I found the following letter on his site years ago, it is a letter in response to an anti-soy article (one like MANY that we tend to see these days….) in Motherhood Magazine. I just felt that in this time of SOY BASHING, to the point where some are trying link childhood soy consumption with homosexuality….sigh, we might need a dose of reality. In his poignant style, Mr. Robbins tells the truth the way he does SO WELL……


Response To Misleading Article About Soy In Mothering Magazine

An article titled “The Whole Soy Story, The Dark Side of America’s Favorite Health Food,” by Kaayla T. Daniel, appeared in the May/June 2004 issue of Mothering Magazine. The article can be read at: http://www.mothering.com/growing_child/food/soy_story.html

The letters that Mothering received in response to the article can be read at: http://www.mothering.com/10-0-0/html/10-6-0/soy-letters.shtml

Here is the letter written in response to the article by John Robbins:

To the editor of Mothering Magazine:

I’ve been a devoted fan of Mothering, and read every issue for more than fifteen years. On many occasions I’ve given subscriptions as gifts to new mothers and families. I’ve always understood why Mothering readers have so much respect for the magazine, and place so much trust in it.

But the article you printed warning against soy products betrays that trust. Actually, it wasn’t an article, it was a diatribe. Under the guise of warning people, and pretending to be a voice of caution, it spreads fears that are unwarranted, exaggerated, and fictitious. Young mothers don’t have the time to investigate the credibility and balance of the articles you print. They trust you to do that for them. In this case, you failed them big time.

I have no association to the soy industry, but I do have a strong dedication to people having accurate information about foods. It is difficult in a short letter to respond to seven pages of biased material, particularly when each page is crowded with half-truths, statements taken out of context, and conclusions drawn inappropriately from data.

The article’s author, Kaayla Daniel, repeatedly says that people of China, Japan and other countries in Asia eat very little soy, so there is no historical precedent for eating the amounts being recommended by people like Dr. Andrew Weil and Dr. Christiane Northrup. This is a misleading half truth. It is true that in parts of Asia, most notably China, soy consumption has been low. But Asia is a very large area with several billion people.

What’s important is not the average soy consumption for the whole of Asia, but the soy consumption in those parts of Asia which demonstrate the highest levels of human health. And there is no question about where that is. The elder population of Okinawa (a prefecture of Japan) have the best health and greatest longevity on the planet.

This is important because the highest soy consumption in the world is in Okinawa. Many North Americans know of Okinawa only for being the site of one of the longest and bloodiest battles of World War II, and for now housing U.S. military bases. But the people of Okinawa have repeatedly been shown to be the healthiest and longest-lived people in the world. This has been demonstrated conclusively by the renowned Okinawa Centenarian Study, a 25-year study sponsored by the Japanese Ministry of Health.

How much soy have the elder Okinawans eaten throughout their lives? The Okinawa Centenarian Study included an extremely thorough analysis of food consumption in the prefecture. The principle investigators and authors of the study (Makoto Suzuki, M.D., Bradley J. Willcox, M.D., and D. Craig Willcox, Ph.D.) state: “Okinawan elders eat an average of two servings of flavonoid-rich soy products per day.”

This is about 20 times more than the amount of soy Kaayla Daniel claims “Asians really eat.” When she says “there is no historical precedent for eating the large amounts of soy food now being consumed,” she is incorrect. Soy makes up twelve percent of the diet of Okinawan elders.

The authors of the Okinawan Centenarian Study analyzed the diet and health profiles of Okinawan elders and compared them to other elder populations throughout the world. They conclude that high soy consumption is one of the main reasons that Okinawans are at extremely low risk for hormone–dependent cancers, including cancers of the breast, prostate, ovaries, and colon. Compared to North Americans, they have a staggering 80 percent less breast cancer and prostate cancer, and less than half the ovarian cancer and colon cancer.

This enormously reduced cancer risk arises in part, the study’s authors say, from the Okinawans large consumption of isoflavones from soy. This is an important finding. The lowest cancer rates in the industrialized world are found in the Okinawans who consume the most soy.

Other studies have confirmed the link between soy consumption and reduced cancer risk. The Japan Public Health Center Study found the lowest breast cancer rates in those prefectures where women ate the most soy products. And a recent study published in the British medical journal Lancet showed that women who ate the most flavonoids (mostly isoflavones from soy products) had a substantially lower risk for breast cancer than those who had lower flavonoid intake.

The reason the ardently pro-pharmaceutical FDA wound up affirming that soybeans are a food that can prevent and even help cure disease was not, as Kaayla Daniel says, because the agency is in bed with the soy industry, but because the evidence was so convincing. The reason the FDA now allows food manufacturers to talk about the benefits of heart-healthy soy in their products is because the substantiating data are overwhelming.

These are staggering numbers. The study’s authors state that if North Americans lived more like the elder Okinawans, and ate the amount of soy they do, we “would have to close 80 percent of the coronary care units and one-third of the cancer wards in the United States, and a lot of nursing homes would also be out of business. By 1990, Okinawan life expectancy figures had even surpassed the absolute limits of population life expectancy assumed by the Japan Population Research Institute. Limits had to be revised upwards simply to account for the phenomenal longevity of the Okinawans.”

It is not an accident that in Okinawa, home to the highest soy consumption in the world, heart disease is minimal, breast cancer is so rare that screening mammography is not needed, and most aging men have never heard of prostate cancer. The three leading killers in the West — coronary heart disease, stroke and cancer — occur in Okinawans with the lowest frequency in the world.

There’s also the fact that elder Okinawans have much stronger bones than we do, and less than half the hip fractures that we do. The authors of the Okinawa Centenarian Study attribute the increased bone strength and health in Okinawa to soy consumption. Many other studies confirm the connection between increased soy consumption and reduced osteoporosis.

I am very sorry that Mothering printed the article by Kaayla Daniels because it is so full of bias and fallacies. Its authoritative tone may sway some people to unnecessarily avoid soy, and that would be a shame. For most people, consumption of the levels of whole soy foods recommended by authors like Dr. Andrew Weil and Dr. Christiane Northrup, which correspond to the levels eaten by the Okinawans, are not only safe, but tremendously helpful to disease prevention and the creation of vibrant and resilient wellness. Of course if you are allergic to any food, then you shouldn’t eat it. But dairy products, for which soy products are often substituted, are more likely to produce allergic reactions than soy. And by the way…

-Cow’s milk provides more than nine times as much saturated fat as soy beverages, so is far more likely to contribute to heart disease.

-Soy beverages provide more than 10 times as much essential fatty acids as cow’s milk, and so provide a healthier quality of fat.

-Soy beverages are cholesterol-free, while cow’s milk contains 34 mg of cholesterol per cup, which again means that cow’s milk is far worse for your heart and cardiovascular system.

total and LDL cholesterol levels, providing yet more reasons soymilk is better for your health.

-Soy beverages contain numerous protective phytochemicals that may protect against chronic diseases such as heart disease and osteoporosis. Cow’s milk contains no phytochemicals.

-Men who consume one to two servings of soymilk per day are 70 percent less likely to develop prostate cancer than men who don’t.

I do not understand why Mothering would allow its pages to be used for such a misleading article. I hope that you allow more balanced voices substantial space in the future to undo the damage you’ve done. Mothering’s readers expect and deserve sane and helpful articles, especially about subjects like nutrition. They don’t need more fear mongering. We’ve got quite enough of that in our society today.

Readers who want further information about health and longevity in Okinawa can see the excellent book The Okinawa Program.

And readers who want to see a balanced response to many of the specific allegations made against soy can visit: http://www.foodrevolution.org/what_about_soy.htm

Author, Diet For A New America, May All Be Fed, and The Food Revolution

The Complete Speed & Power Summit is BACK!

VLOG – Are you avoiding Exercises that you dislike in your own training?

Our Complete MISUNDERSTANDING of HIIT….once again.

My Favorite Exercise for Each Essential Movement Pattern…

ABOUT US
Coach Dos is a sought after international speaker on a variety of conditioning topics such as Program Design, Cardio-Strength Training, Olympic Weightlifting applications, Sport-speed development, Explosive training, and CHAOS™ Speed Training. Coach Dos served as Director of Speed, Strength & Conditioning @ College of the Canyons in Santa Clarita, CA, a position he had held from 1999-2015. Coach Dos is also the 2006 recipient of the National Strength and Conditioning Association‘s prestigious Collegiate Strength and Conditioning Professional of the year for 2006.
Contact us: [email protected]
FOLLOW US
© All Rights Reserved & Content Copyright by CoachDos.com Digital Marketing & Design by Streamline Results
MORE STORIES

The Complete Speed & Power Summit is BACK!